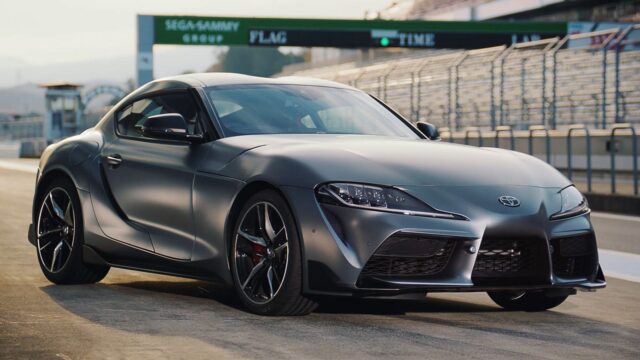 It’s seventeen years since the last new Toyota Supra graced Irish roads. Other sports-coupes like the Celica and MR2 also disappeared but thanks to a much-publicised joint venture with BMW, the Toyota Supra is back, this time as an A90-generation and wearing a ‘GR’ badge for Gazoo Racing destined to grace a bunch of future sporting Toyota models. There was a lot riding on this Supra’s shoulders to help revive Toyota’s reputation for making great performance cars and we take a closer look at how it did.

This car came from development-sharing and the Supra coupe and BMW Z4 roadster needed each other to see the light of day. Manufactured in the same Magna Steyr factory in Austria, the Toyota and BMW share many structural hard points, including wheelbase length (2470mm), A-pillar and windscreen placement, the location of the front-mid-mounted engine and where the fuel tank sits. The flagship models also share drivetrains – BMW’s revered 3.0-litre single-turbo straight six tied to an eight-speed ZF automatic transmission – which neatly maintains Toyota’s heritage in building straight-six Supra’s.

The Supra’s single turbo straight-six makes a healthy 335hp and 369Ib ft of torque over a wide band of revs and 500Nm of torque from 1600-4500rpm. That means you don’t have to rev it very hard for it to feel muscular, although you probably will anyway just to hear its pleasing engine note as it nears the redline.

The Supra is quick enough to blast from 0-100km/h in 4.3 seconds. That’s quicker than BMW’s equivalent and isn’t too far shy of what AMG’s rear-drive V8s are capable of. Numbers are one thing but it’s the feeling that matters. On the road, the Supra’s dynamic balance is neutral and confidence-inspiring for a fantastic corner entry and exit. And then there’s that superb BMW-developed, Toyota-tuned engine, which has so much power and so many ratios that you never feel short-changed. The ZF auto is near-faultless in its shift intuitiveness and smoothness and the Supra is a seriously quick car. You can really feel the short wheelbase in corners as the Supra pivots into place, with satisfying playfulness and character.

Leaving the suspension in Normal mode allows the Supra to breathe with the road. Its body control remains taut yet it dispatches scarred surfaces with a suppleness that perfectly suits the turbo six’s torque delivery. In this sort of environment, Sport mode introduces too much vertical movement as the Supra pitches and reacts to lumps that Normal damping would smooth over. Overall it delivers a hugely accomplished and rapid car that is both suave and satisfying.

BMW switchgear abounds inside the Supra, though that’s a good thing. Toyota should be delighted that its instrumentation is excellent in both design and clarity. Likewise the Supra’s excellent steering wheel with intelligently sized wheel-rim thickness and thumb placement. And with a rear opening revealing a 290-litre boot, the Supra is relatively practical too, despite its small door pockets and fairly minimal cabin storage.

Buyers of the Toyota Supra in Ireland will have the choice of two versions, starting with the GR Spec that will cost €81,260. With this, you get most of the main features that include LED Adaptive headlights with daytime running lights, a black Alcantara interior with an electrically adjustable driver’s seat, memory function and heated front seats. Auto folding door mirrors, keyless entry and engine start is joined by an 8.8-inch infotainment display with satnav and Apple CarPlay.

Regardless of what you think of the styling as some people not sure about it, I can assure you it looks way better in the flesh. The new Supra is on the money. It’s comfortable, accessible and relatively affordable for what you are getting, as well as fast and fun. If Toyota can keep the momentum rolling with even more powerful models and alternative transmission choices, then the A90 Supra will truly be the halo product Toyota wants it to be for its fun-to-drive future. If the Supra is out of your price range we are hoping to review the new GR Yaris in the weeks ahead.