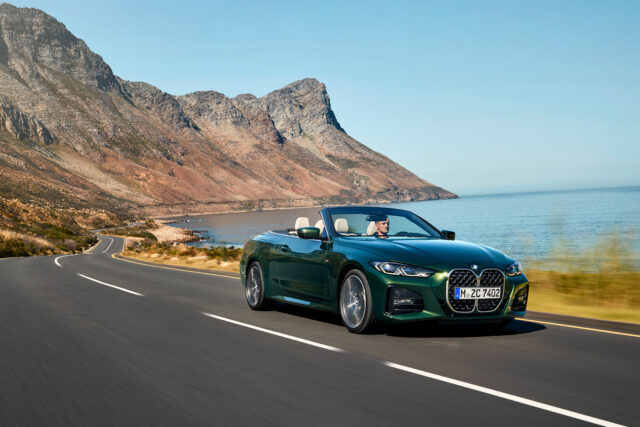 The sporting prowess and exhilarating driving experience of the new BMW 4 Series are taken to even greater heights with the addition of the new Convertible version.

All models feature the M Sport specification as standard, with the new, even more performance-focused M Sport Pro Edition also available. In addition, both specifications can be upgraded with the Technology Pack – one of several option Packs that enable a high level of personalisation.

The new arrival to the sixth model generation’s model range – the BMW M440i xDrive Convertible – offers standout performance courtesy of a 374hp six-cylinder in-line petrol engine, with power transferred to the road via a Steptronic eight-speed gearbox and the intelligent xDrive all-wheel-drive system.

There will also be a choice of two four-cylinder petrol units and a four-cylinder diesel from launch in March 2021. Two straight-six diesel engines will join the engine line-up later in 2021.

The new BMW 4 Series Convertible will be built at BMW Plant Dingolfing.

The striking proportions and stylish elegance of this open-top four-seater follow the lead of the BMW 4 Series Coupé and ensure the car’s sporty profile.

At the same time, the brand’s new design language has produced a distinctiveinterpretation of the low-slung silhouette long-established as a signature feature of midsize BMW convertibles.

The newcomer’s powerful presence also stems from its larger exterior dimensions. At 4,768 millimetres, it is 128mm longer than its predecessor, while width has increased by 27mm to 1,852mm and the wheelbase by 41mm to 2,851mm. With the roof closed it stands at 1,384mm. It also benefits from increased track widths (+ 28mm at the front, + 18mm at the rear).

Alongside the car’s proportions, it is the front end of the new BMW 4 Series Convertible that highlights its standalone character and distinguishes it most clearly from the new BMW 3 Series Saloon. The defining element is its large, vertically emphasised BMW kidney grille, which – as on the new BMW 4 Series Coupé – has a pronounced forward slant and, for optimised cooling, employs large air intakes with a mesh structure as standard.

Full-LED headlights are fitted as standard. There is also the option to specify the Visibility Pack, which adds BMW Laserlight and high beam assist. BMW Laserlightincludes the adaptive cornering function with variable road illumination optimised for urban and motorway driving and, at speeds above 37mph, increases high-beam range to a maximum 550 metres and follows the course of the road.

New darkened headlights are also available for the M440i xDrive as part of the exclusive Shadowline Pack. Other variants can also be fitted with these stylish headlights if the optional performance-focused M Sport Pro Pack is chosen.

Its dynamic side profile helps to give the new BMW 4 Series Convertible a low-to-the-road look, while contoured surfaces intensify the car’s high-performance character.

The precise lines and three-dimensionally sculpted surfaces of the rear wheel arches combine to give the new BMW 4 Series Convertible a striking look, particularly with the roof down. This impression is reinforced by the slim rear light units extending into the flanks. The lights are darkened, with their rear bars illuminating to reproduce the L shape familiar from other BMW models. When closed, the roof flows into the car’s shape to reinforce its sporty appearance.

The innovative panel bow soft-top on the new BMW 4 Series Convertible blends the strengths of a retractable hard-top and the traditional appeal of a fabric roof. It comprises large panel bow elements with a flush-fitting glass rear window, several layers of insulation and a fabric cover available in Black as standard and Anthracite as an option. The acoustic and thermal comfort of the panel bow soft top roof are far superior to that on a conventional soft top. It also 40 per cent lighter than the outgoing model’s retractable hardtop.

The roof is powered by an electric motor that enables it to open or close within 18 seconds at the push of a button, including while on the move at speeds up to 31mph. The variable soft top compartment allows luggage capacity to be increased from 300 to 385 litres when the roof is closed.

Interior: premium seating for four with an emphasis on refinement and driving enjoyment

The BMW 4 Series Convertible’s driver-centric cockpit design features a large screen-grouping formed by the instrument cluster and Control Display. The ergonomically-optimised arrangement of the controls emphasises that this is a car built for drivingenjoyment – as do standard features including electric sports seats in the front with automatically extending and retracting belt feeders, Vernasca leather trim, seat heating and a leather sports steering wheel, plus the clear individual seat design of the two rear seats.

New to the BMW 4 Series Convertible line-up is the M440i xDrive.

Powered by a 374hp sixcylinder in-line petrol engine, the flagship model has a standard specification designed to complement the enjoyment of open-air driving with performance that would be respectable on a racetrack.

Four- and six-cylinder engines with BMW TwinPower Turbo and mild–hybrid technology for greater performance and efficiency.

Mild-hybrid technology features in the new BMW M440i xDrive Convertible and all diesel model variants to boost both performance and efficiency. Fitting a powerful 48V starter-generator and a second battery allows far more braking energy to be regenerated and stored. This energy is used to supply the electrical system, lighten the combustion engine’s workload and increase its power. The starter-generator produces an electric boost effect that instantly delivers an additional 11hp for overtaking or even quicker getaways off the line.

A 190hp four-cylinder diesel engine, featuring BMW TwinPower Turbo technology with twostage turbocharging, powers the new BMW 420d sDrive Convertible. It returns combined fuel consumption of up to 67.3mpg, with CO2 emissions of 119-111g/km, while the similarly-turbocharged BMW 430d sDrive Convertible, which is due to arrive later in 2021, delivers figures of up to 50.4mpg and 147g/km.

Two turbochargers of different sizes ensure exceptionally rapid power delivery in the forthcoming BMW M440d xDrive Convertible. Its strong performance is complemented with combined fuel economy of up to 44.8mpg and it emits 165g/km CO2.