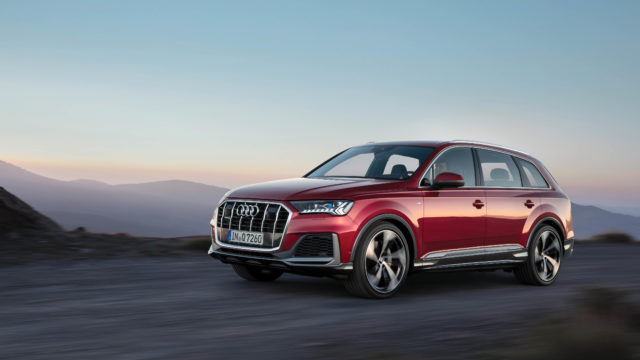 Audi is launching the all new Audi Q7 – with a striking new visual design and top of the line connectivity. The premium SUV features the new design of the Q family and offers superb dynamics and excellent comfort, in addition to its superior spaciousness. Mild hybrid technology, the digital operating concept and the optional HD Matrix LED headlights including laser light are just some of the highlights. The new Audi Q7 will be launched in Ireland later in the year.

The Audi Q7 demonstrates the hallmark SUV elements in the current design language. It bears the large octagon-shaped Singleframe, with six upright slats providing the structure. As such, the SUV looks even more powerful. The two-part side air inlets have a much more expressive line, just like the sill area that underscores the large SUV’s ground clearance and, in turn, its offroad capabilities. The headlights, optionally in HD Matrix LED technology with Audi laser light, emphasise with their contour and light signature the width of the full-size model. On the restyled rear, a striking chrome strip creates the visual connection between the flat rear lights with their technical-looking graphics and carries forward the horizontal body line. The designers achieved the clear view with taut, flat surfaces, which span the entire width particularly in the license plate region. The Audi Q7 is particularly striking in S line guise. 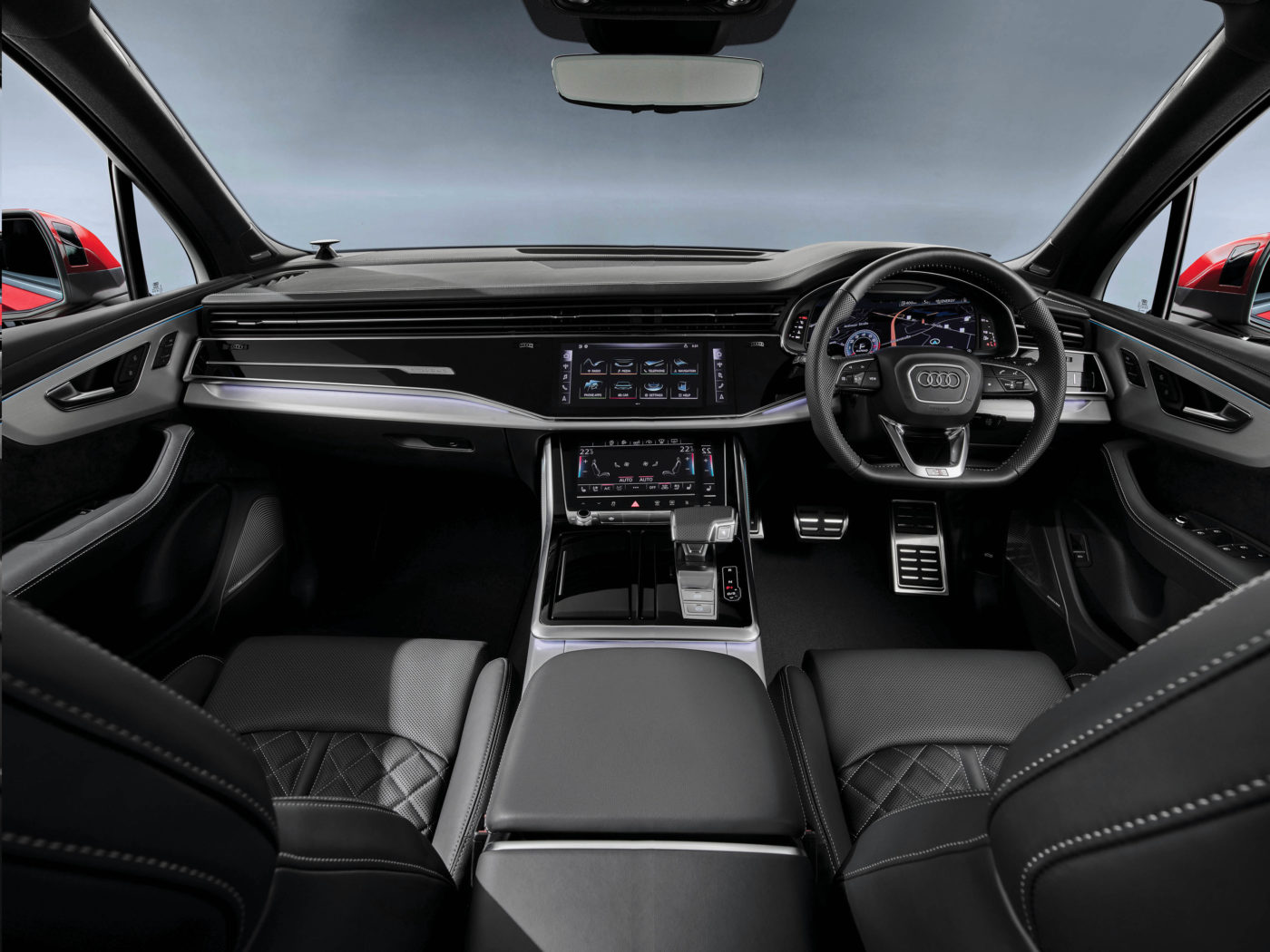 Sporty on-road, powerful off: the suspension
Audi has substantially enhanced the dynamic attributes of the Q7. In addition to the optimised all‑wheel steering that allows the rear wheels to turn as much as five degrees in the opposite direction, there is the option of electromechanical active roll stabilisation. Adjustable stabilisers reduce the body movements on uneven roads when driving in a straight line. With a sporty driving style, the focus is on optimum roll compensation – the tendency of the car to lean into the bend is reduced substantially.

All of the engines in the Audi Q7 are coupled to an eight-speed tiptronic and the permanent all‑wheel drive. A choice of two diesel engines will be available at market launch. Shortly after the market introduction in September a plug-in hybrid model, will join the line-up. The standard mild hybrid technology plays a major part in the efficiency of the engines. In customer operation, this technology can reduce consumption by up to 0.7 litres per 100 kilometres. Its central component, the belt alternator starter (BAS), powers a 48-volt main electrical system in which a compact lithium-ion battery stores the energy. During braking, the BAS can recover up to 8 kW of power and feed it back into the battery. If the driver takes their foot off the accelerator at speeds between 55 and 160 km/h the Audi Q7 recuperates energy, rolls in idle or coasts for up to 40 seconds with the engine switched off. The BAS restarts the engine the next time the accelerator is depressed, and does so faster and more gently than a conventional starter. The start‑stop range begins at 22 km/h.

With seven seats – the Audi Q7 combines immense prestige with practical everyday qualities. Through its new design, the large SUV has now grown eleven millimetres to 5,063 millimetres long. It measures 1,970 millimetres wide and 1,741 millimetres (including roof aerial) high. The Audi Q7 outdoes its direct competitors with interior length as well as headroom and elbow room in the front and rear. A host of storage compartments including a new compartment in the instrument panel as well as the generous load capacity provide highly functional utility value. Depending on the position of the rear seats the luggage compartment on the five-seater version offers between 865 and 2,050 litres of capacity – the latter with a flat load area. An electric tailgate is standard; foot-activated gesture control is available as an option.

The cockpit architecture harmonises perfectly with the new, digital operating concept, which incorporates two large touchscreens. They provide haptic and acoustic feedback when clicking on the touch controls. When off, the top display slots almost invisibly into the large black decorative surface. All elements refer logically to one another, from the flat air vent strip to the wide console on the centre tunnel. 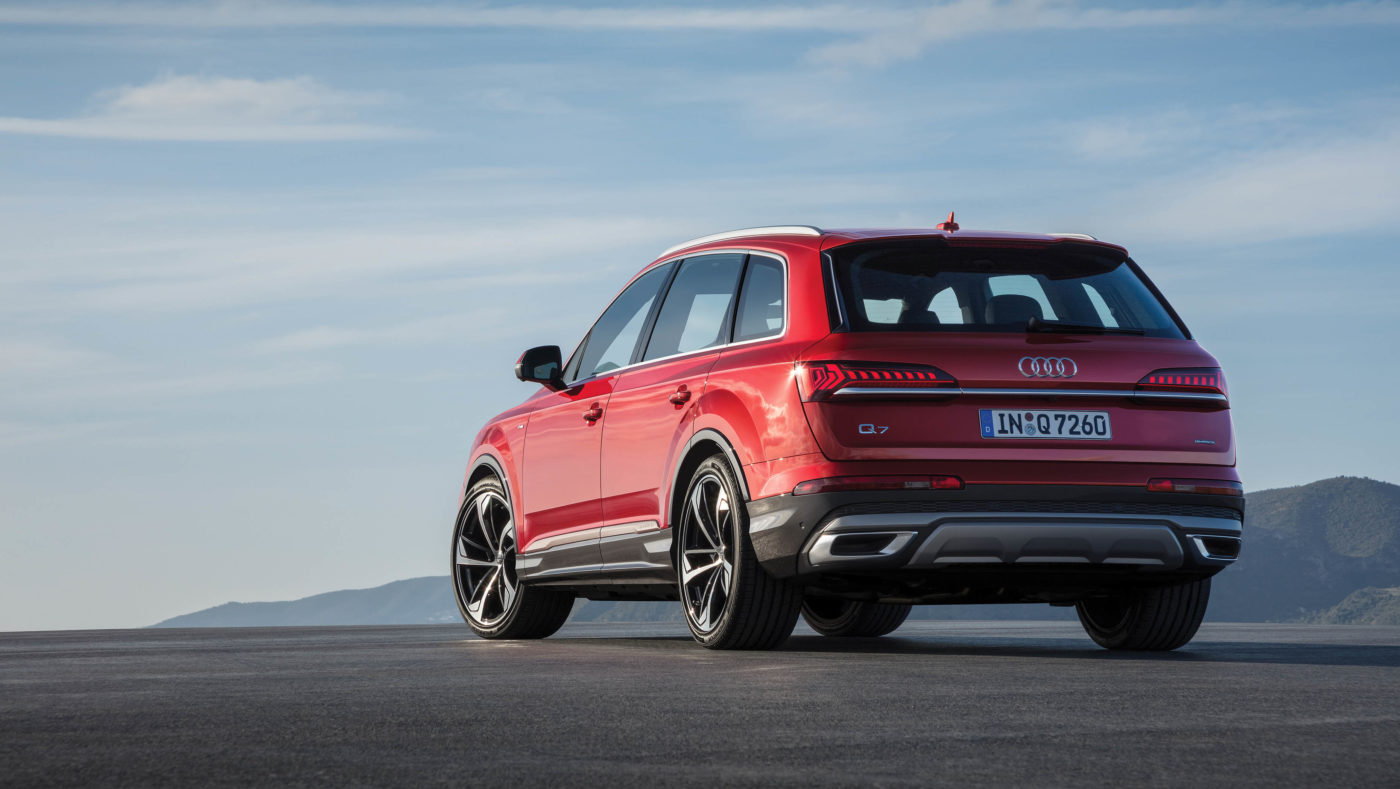 The MMI navigation plus delivers top-of-the-line connectivity. It features LTE Advanced, a Wi-Fi hotspot, natural voice control and the extensive Audi connect portfolio. The latter ranges from traffic information online, navigation with Google Earth, to the hybrid radio. The all-digital Audi virtual cockpit – and the optional head-up display – provide an individual speed recommendation as well as the remaining time until the next green-light phase if the driver is already waiting at a red light. The system thus contributes to a predictive and efficient driving style and facilitates a steady flow of traffic.