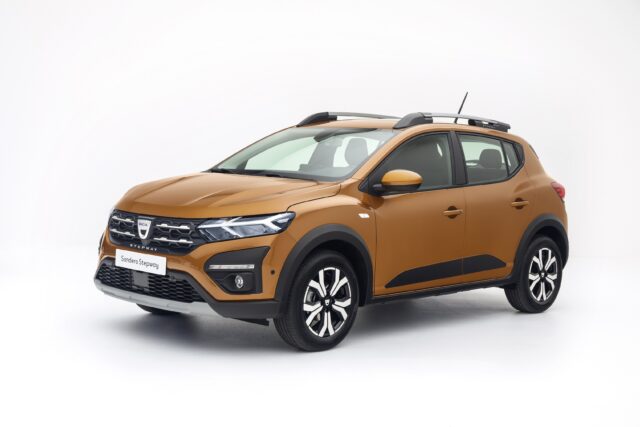 Dacia has refreshed its offer in the compact car segment with the All-New Sandero and Stepway. The latest third generation models offer simple, spacious, reliable and robust vehicles with no unnecessary frills, at the most competitive price.

An iconic and popular model, the Sandero has been the best-selling car in Europe in the retail customer segment since 2017 and the best-selling Dacia model with almost 2.1 million cars sold, representing 32% of the carmaker’s sales since 2004.

Sandero has been a high achiever in Ireland with over 9,500 sold since the model launched here in 2013.  The more adventurous Stepway has sold more than 1.3 million cars globally, and has been the Sandero model of choice for the majority of Irish customers, accounting for over 60% of Sandero sales here.

With the same external dimensions as the outgoing models, both versions deliver greater modernity, roominess and versatility with the simplicity and reliability drivers have come to expect from Dacia.

Thanks to a new platform, they offer increased active and passive safety features, new engines – including petrol and LPG Bi-Fuel – a new automatic transmission and an all-new six-speed manual.

The All-New Sandero and Stepway continue to give customers greater access than ever before to the best value-for-money cars on the market.

Subtle tweaks to the exterior ensure the All-New Sandero delivers an strong and robust presence. The overall lines are smoother, with a more sloped windscreen, a slightly lower roof and flowing roofline. Ground clearance is unchanged yet the New Sandero gives the impression of sitting lower and more grounded.

The front and rear lights display Dacia’s new Y-shaped LED light signature, providing the All-New Sandero with a strong identity. A horizontal line joins the two lights both at the front and rear and extends into the LED lights, giving the car greater visual presence.

The LED headlights, offered as a standard feature across the entire model range, increase night-time visibility, with a 37% increase in beam length and 9% in beam width.

The design of the door handles reveals a focus on quality and more ergonomic shape. Most versions now have electric boot release on the lower tailgate section, improving the looks and practicality. The new shape of the doors and wing mirrors improves the car’s aerodynamics while reducing air noise all occupants.

The All-New Stepway is immediately recognisable at the front with its unique ribbed and domed bonnet, the chrome Stepway logo under the front grille and the curved fenders above the fog lights. The front and rear bumpers include a metal skid plate designed to give protection from everyday scratches.

The All-New Stepway’s modular roof bars look like regular roof bars but are adjustable. Using a key located in the glove compartment, they can be easily dismantled in just a few seconds and turned into a roof rack with a load capacity of up to 80kg.

The All-New Sandero and Stepway are fitted with a new front axle with rectangular suspension arms that provide effective shock absorption and enhanced steering. Anti-roll capacity has been improved and the wheelbase extended for greater cornering stability. The new engine mount has been upgraded to minimise vibrations in the cabin.

Petrol and LPG Bi-Fuel powertrains are available in Sandero and Stepway models, all of which comply with stringent Euro6D-Full emissions standards that come into effect on 1 January 2021.

The integration of this technology into Dacia factories, that has been tried and tested on the TCe 100 Bi-Fuel engine, guarantees its safety and reliability. The manufacturer warranty period, servicing and boot capacity are the same as those of the petrol version (the LPG tank is located where the spare wheel would be).

Running on LPG, the All-New Sandero Bi-Fuel emits on average 11% less CO2 emissions than an equivalent petrol engine. It is also capable of travelling more than 1280km with the two tanks combined: 50 litres for the petrol tank and 40 litres for the LPG tank.

Available in combination with the TCe 90 engine, fuel consumption has decreased thanks to a lighter gearbox and better engine management, while CO2 emissions are reduced compared with the previous automatic model (11% reduction for the All-New Sandero, and 4% for All-New Stepway).

Stop&Start is standard on all engines, which automatically turns the engine off when the car comes to a standstill, such as in traffic, restarts almost instantly.

Inside, the redesigned dashboard features a fabric-wrapped insert alongside new air vent designs for a more premium design.

For the All-New Stepway, interior upholstery is customised with the Stepway logo, while the door panels and dashboard get exclusive orange fabric inserts and edging.

The All-New Sandero and Stepway both feature three rear seats which can accommodate three adults, while a 1/3-2/3 split-fold rear bench seat (depending on the version) brings further practicality. The boot of the Sandero has a generous 328-litre capacity and features a flat floor with adjustable height floor with two positions.

Rear seat accommodation is especially spacious, with an additional 42mm of space compared to the outgoing models. Elsewhere, the cabin offers up to 21 litres of storage with cubby holes and pockets featured beneath the central armrest, in the front and rear doors and in the back of the front seats.

Newly designed front seats provide greater comfort and support with height adjustable headrests and new, more premium upholstery. A wider range of adjustment in the front seat and steering wheel boosts comfort for the driver, while a central armrest available on Prestige versions enhances this further. The gearlever is now shorter, while the power steering offers greater driving comfort – especially in tighter manoeuvres or in car parks – with 36% less effort required than the previous Sandero.

The features available on the All-New Sandero and Stepway are in line with what customers want and need in their cars. We listen to our customers and give them the useful features and technology that they’re asking for, without adding unnecessary costs.

Standard features across the range include a smartphone holder (removable depending on the version), an on-board computer screen and a steering wheel featuring speed limiter. Automatic headlight activation is available from Essential models and up.

With Media Control, smartphones can be placed on a clever removable smartphone support in front of the driver to become a remote multimedia system via the new free Dacia Media Control app and a Bluetooth or USB connection.

The system provides easy access to the radio, music, calls, messages, sat nav apps and many other features such as Siri and Android voice recognition. Controls are within easy reach either on the steering wheel (for the radio) or behind it (sat-nav) to ensure safer driving.

Without a smartphone connected to the Media Control, radio and file playback via the USB port is also available, giving customers a wide range of options. Further equipment includes two speakers, Bluetooth and USB connection, and the 3.5-inch TFT digital display between the dials, where the radio settings are also displayed.

With Media Nav, the console features a large 8.0-inch touchscreen positioned at the top of the dashboard with four speakers throughout the vehicle. The screen is slightly angled towards the driver for greater visibility and ergonomics. The design is sleek, and the intuitive, easy-to-use interface is compatible with Bluetooth and Android Auto and Apple CarPlay.

The All-New Sandero and Stepway are the first Dacia models to be built on the CMF modular platform. Offering superior strength and rigidity, it increases protection in the event of a collision. The structure has been reinforced in the engine bay and the passenger compartment. The new door pressure sensors and accelerometer can detect early side-impact collisions enabling the new curtain and side airbags to inflate rapidly, protecting the stomach, chest and head.

The All-New Sandero and Stepway include the following standard features: six airbags, seat belt load-limiters, front and back seat belt pretensioners and emergency call system (SOS button located next to the dome light in the front of the car).

The structural frame of the new front seats has been improved and anti-whiplash headrests have been fitted to provide better protection.

Standard LED headlights improve visibility, increasing the length of the beam light by 37% (110 m) and the width by 9% (24 m) compared with the halogen dipped beam headlights of the outgoing Sandero, while there’s also a broader selection of Advanced Driver Assistance Systems (ADAS) available.