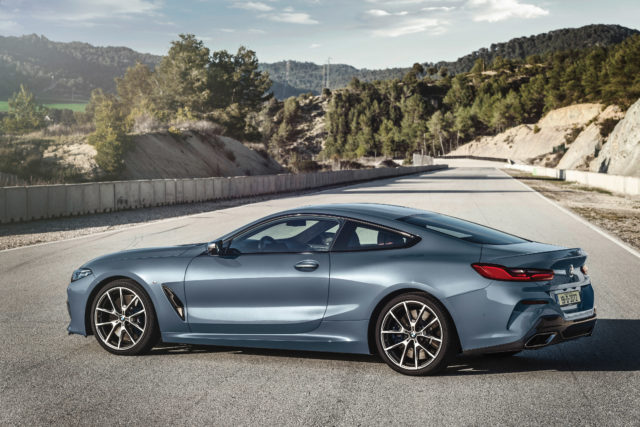 The 8 Series is a two-door coupe with a long nose, swooping roofline and powerful haunches – characteristics which have been admired by performance car enthusiasts for well over half a century.

This is the second-generation 8 Series after the original E31 8 Series that was released in 1990. I was a big fan of the original and was therefore eager to see this new model. The 8 Series brings with it a new BMW design language that will filter through the company’s entire vehicle line-up. BMW say the 8 Series Coupe will open a new chapter in the brand’s long history of sports cars, following in the footsteps of the first generation 8 Series GT that was discontinued in 1999. It is fitting that we get to feature the new 8 Series on our cover ten years on from when the first generation was discontinued. 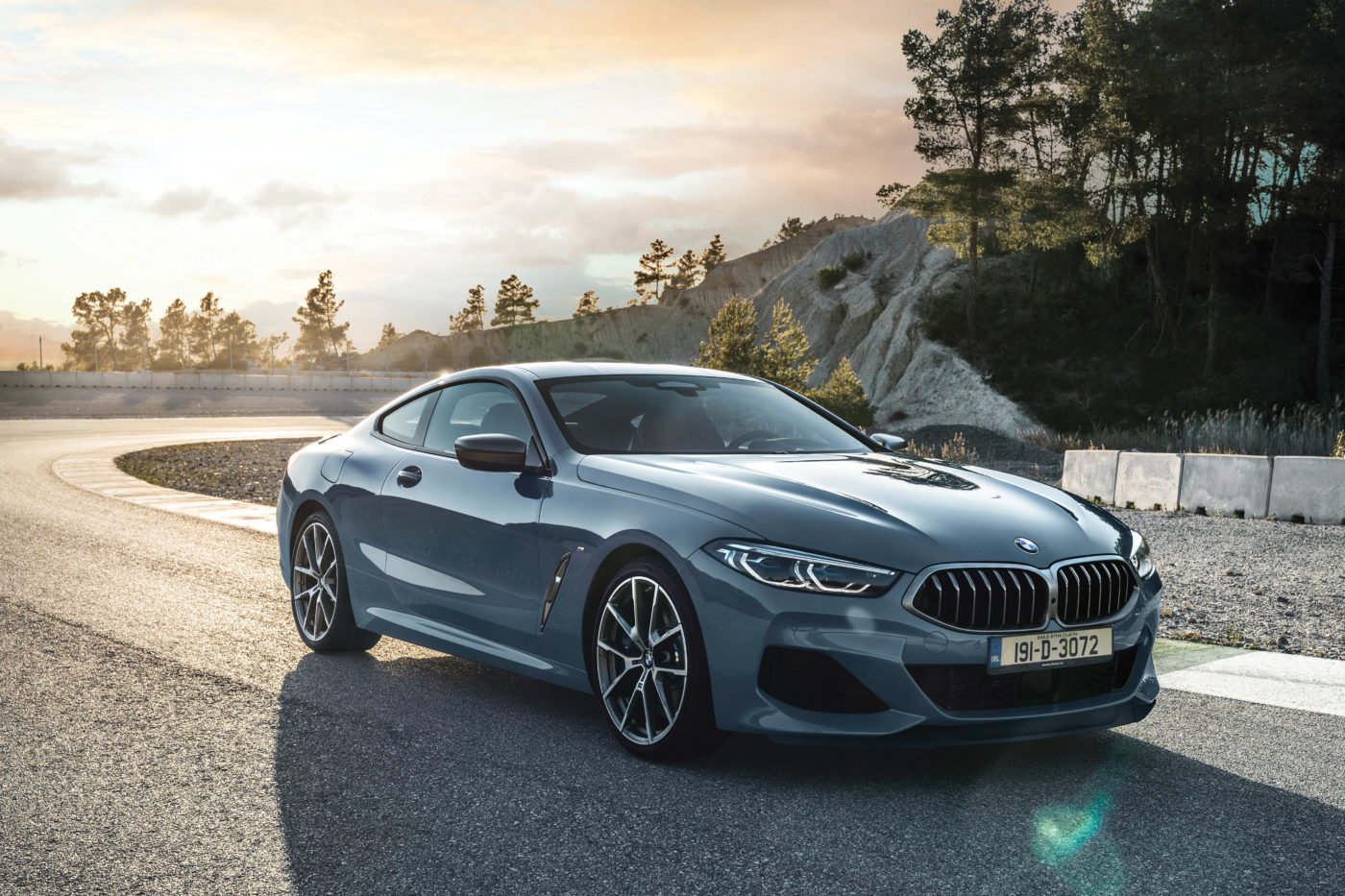 Our BMW 840d xDrive came with the M Sport Technic Package at a cost of €4,000 and equipped with an electronically controlled M Sports differential lock. Controlled by the electronic stability control system (BMW’s ‘DSC’), the locking function for the rear differential can prevent a wheel from spinning in low-traction situations, thereby improving traction and power transmission when driving on loose ground or surfaces with variable grip levels. This locking effect is achieved by an electric motor and allows up to 1500 Nm of drive torque to be redirected from the faster-turning (i.e. low traction) wheel to the slower-turning wheel. Also included is M Sport braking system, M seat belts, steering wheel, bodystyling and anthracite alcantara headlining. 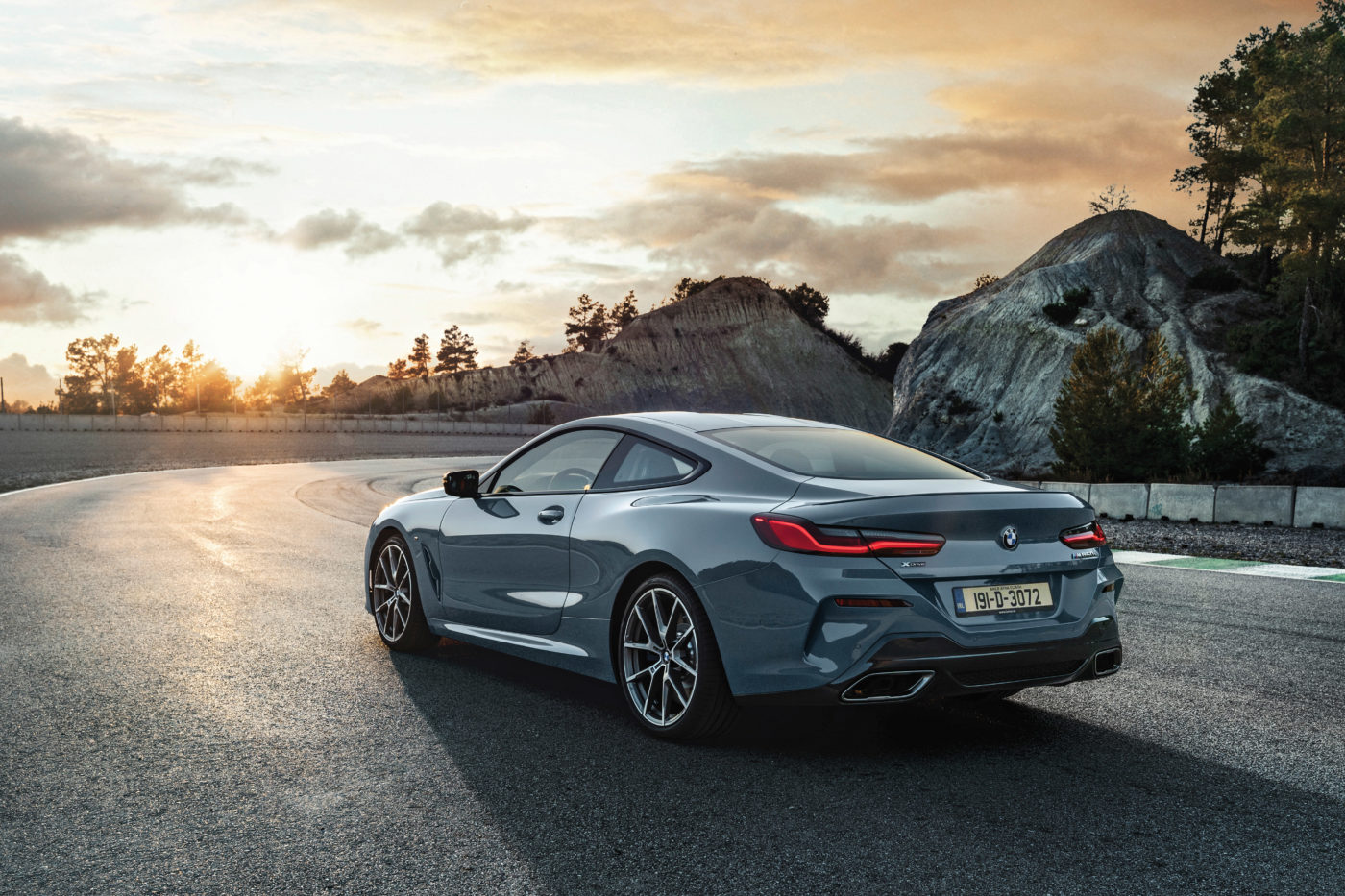 On the design side the 8 Series features a low-slung, flowing and futuristic design with trademark kidney grille with the slimmest LED headlight fitted to any BMW so I have been informed. It’s muscular, yet elegant, with great proportions and presence. BMW can still design cars that are classic beauties.

With a new fresh new look comes two equally impressive engines. The petrol-powered M850i xDrive Coupe will top the range until a full-fledged 8 Series M model is revealed later this year. The M850i uses BMW’s familiar 4.4-litre twin-turbo V8, but with new updates, output has been increased without adding any weight.

Our test vehicle is the 8 Series diesel model, 840d xDrive Coupe, offering a supreme pulling power and excellent fuel economy. The 3.0-litre straight-six produces 235kW and 680Nm of toque, available from 1750rpm, and will accelerate to 100km/h in 4.9 seconds. 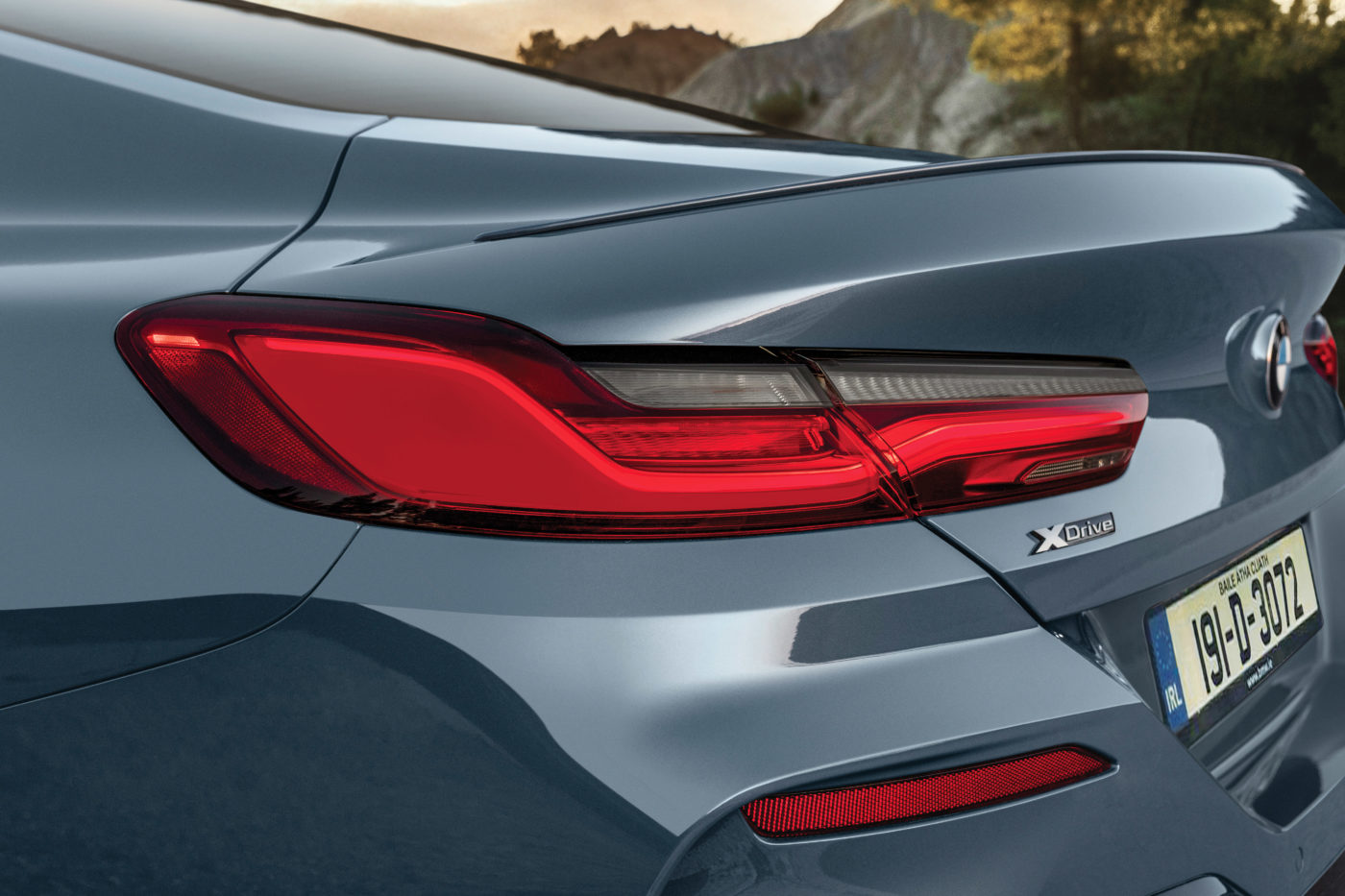 Both engines are paired to an improved version of BMW’s 8-speed Steptronic gearbox and a rear-biased xDrive system. Adaptive M suspension with electronically controlled dampers, Integral Active Steering, M Sport brakes and 20-inch M light-alloy wheels all enhance the BMW driving experience. The 8 Series also sees the introduction of BMW’s latest driver assistance systems with Active Cruise with Stop & Go fuction, Steering and lane control assistant, BMW Night Vision, Parking Assistant all fitted. The number 8 in the model name stands for a high-ranking status within BMW’s product range. As in the past with the BMW Z8 and also with the current BMW i8, it is reserved for sporty cars that also fire the emotions.

In the cabin there are newly developed sports seats with Vernasca leather and they are beautiful to the eye and also extremely comfortable. Leather can also be found on the door shoulders and instrument panel as standard. All driving information is displayed on a digital 10.25-inch Control Display and the rear backrest can be split 50:50 and folded down to increase the capacity of the 420-litre boot. Like the exterior’s modern, emotive design language, the coupe’s interior is stylish and plush, accented by soft leather and electroplated surfaces—it almost feels like one is entering a cocoon on wheels. The design of its wide centre console is practical and not overly complicated, so the driver’s gaze is focused on the road ahead. As per standards, the coupe comes with those beautiful sports seats, Harman Kardon surround sound system, a wireless charging feature, and a leather sports steering wheel with multifunction buttons and shift paddles. 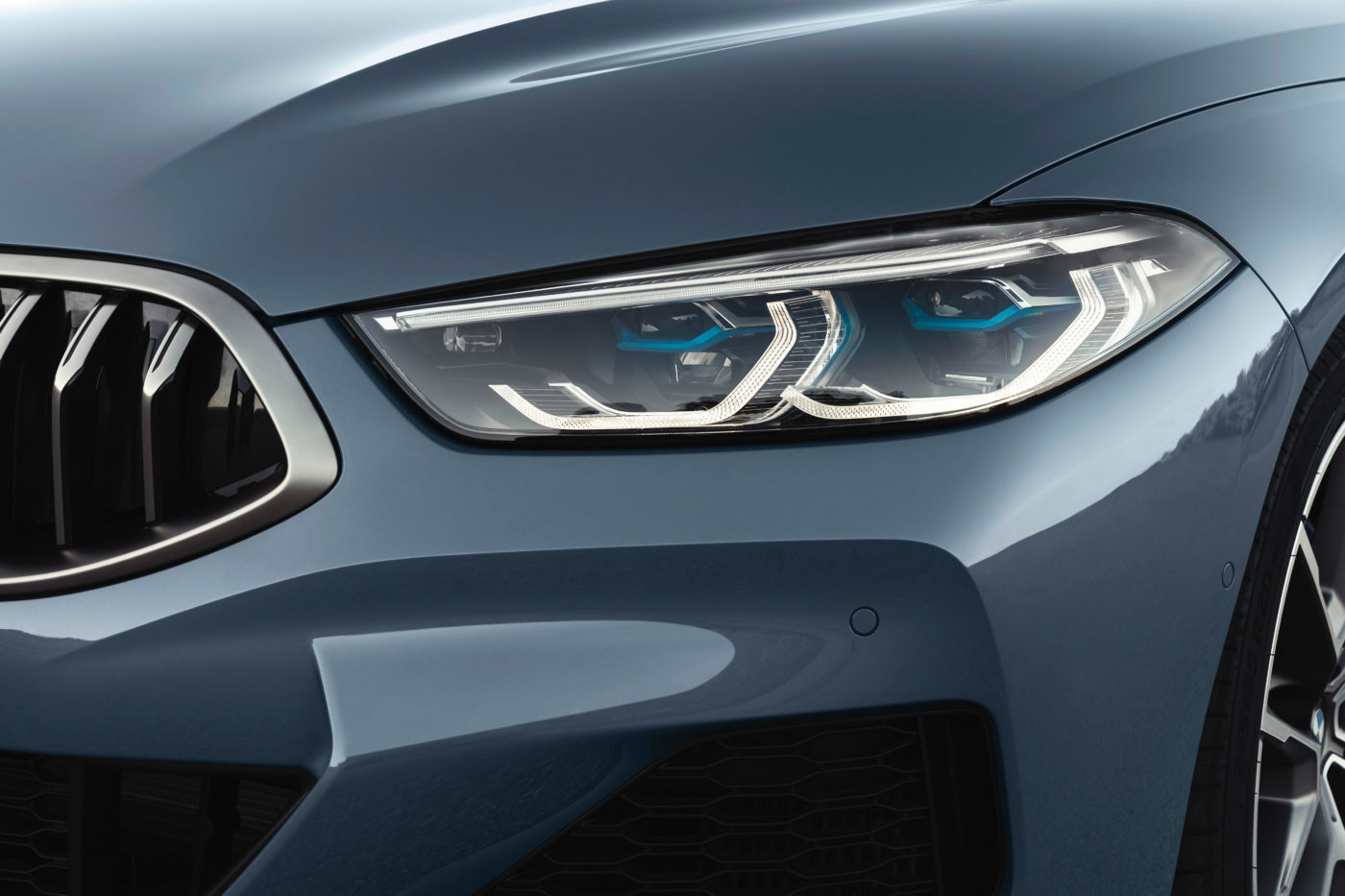 So how does it drive. Well the 840d is an effortless, quiet and smooth cruiser on public roads, but find the right moment to plant the right foot and it’s angry, loud and impressively quick. Bear in mind some noise cancelling and fake engine notes come through the cabin from the Harmon Kardon setup but it’s all tastefully done. The excellent all-wheel-drive system helps the engine punch the Coupe out of bends with real authority, and a nice sound from its big exhaust pipes. With its standard and well set up adaptive shock absorbers, the 8 Series rides comfortably. Yet despite its almost two-tonne weight, the BMW can also feel sporty and agile. It’s not a snappily agile car as it is a diesel, but there’s a fluid grace to the way the 840d handles and changes direction and pace.

The BMW 8 Series is an interesting mix of eye-catching style, real luxury and sporting promise. It’s a package that fits somewhere between the extreme refinement of the Bentley Continental GT and the sporty driving thrills of the Aston DB11 (both of which I have drove and reviewed last year). It’s not quite as refined as the former, or as sharp as the latter, but as an all-rounder, it’s an impressive machine.

There’s been some criticism of the styling but I think BMW have done a great job and there’s no doubt the interior is beautifully finished and impressively spec’d, with the latest version of BMW’s iDrive infotainment system. There’s a 4×4 drivetrain with a punchy diesel and a devastatingly quick V8 petrol in the M850i, while a big boot makes this a genuinely practical grand tourer, if you accept that the confined rear seats are only for occasional use.