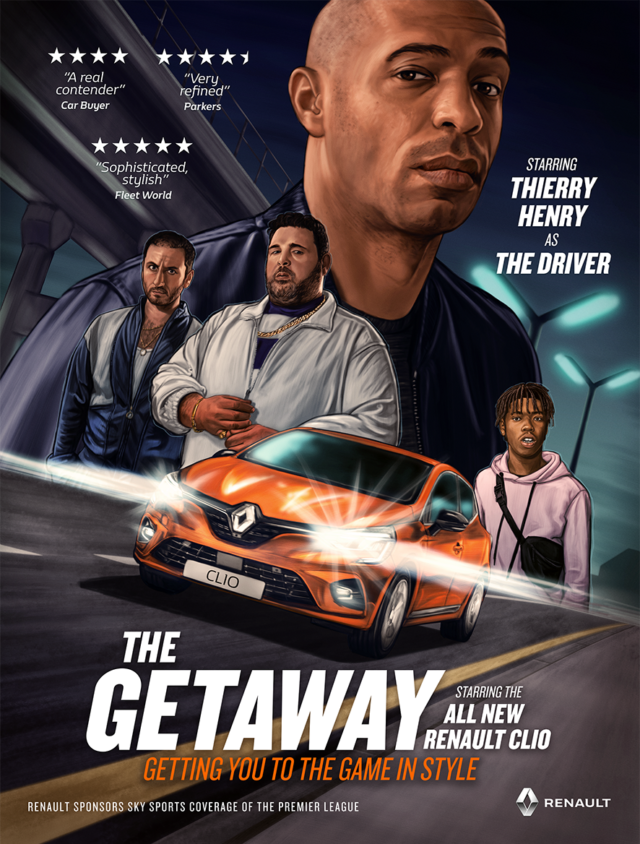 Renault has announced it will sponsor Premier League football coverage on Sky Sports for the next three years, from the start of the 2019/20 season celebrating passion for football and the dedication of fans.

The new partnership will see new TV idents broadcast in and around 128 live Premier League games on Sky Sports this season before kick-off and after the final whistle. Highlighting the dedication fans have to be at the game, the idents for this season will celebrate ‘Getting You to The Game in Style’. Taking inspiration from stylish car chases, the new idents will showcase two Renault cars including the All-New Clio and the Mégane R.S. hot hatch. Taking a tongue-in-cheek look at how fans will stop at nothing to see the match, they will once again star Renault brand ambassador, Thierry Henry. Thierry will play the role of ‘The Transporter’; the slickest getaway driver in town, helping football fans escape whatever stands in their way. In the new TV idents, we’ll see Thierry rescue fans from their everyday commitments such as doing the weekly shop or going to the gym and getting them back to watch the game on time.

Renault will receive 15 and five second TV idents in the key commercial breaks in pre-match, half time and post-match. The broader package in 2019/20 sees Renault presence across every kick-off slot in the schedule comprising Monday Night Football, Friday Night Football, Saturday Evening, Saturday Night Football and Renault Super Sunday fixtures. The sponsorship also includes shared sponsorship of key content on the Sky Sports Premier League channel such as Renault Match Choice, Game of the Day, Premier League Review/Preview and Premier League Years. Across the UK and Ireland, Renault idents will also feature on Sky’s Out-of-Home feed, On Demand service and the Sky Go platform that allows fans to watch live or catch-up via mobile, tablet and desktop devices.

Renault will also sponsor digital coverage of the Premier League on skysports.com and the Sky Sports App, including video and display advertising. The sponsorship also includes the Renault Match Zone; a feature which sees Sky Sports transport a bespoke mobile studio to club training grounds, to interview key players and managers.

Rachel Bristow, Planning Director – Sky Media said: “The first year of the partnership was a great success with one of the most closely contested title races in recent memory. As the home of the Premier League, we’re delighted that Renault have renewed their partnership for the next three years. With more games than ever before it will see them sponsor all 128 live games and retain headline naming of Renault Super Sunday. Renault’s continued commitment with Sky Media reflects our ability to reach passionate and desirable audiences at scale, across multiple platforms.