This is the second consecutive year that an electric vehicle is being used to support the Lord Mayor of Cork’s duties and is in line with Cork City Council’s 2019 – 2024 Corporate Plan which sets out the Council’s plans to lead in the creation of a more sustainable city.

The Mustang Mach-E fully electric SUV has a range in excess of 600km and will be charged on site in City Hall. Driving the Mustang Mach-E leads to an approx. 50% cut in running costs compared to driving a petrol or diesel engine in a similar-sized vehicle.

Lord Mayor of Cork, Cllr. Deirdre Forde said: “I want to express my gratitude to Pàdraig and the team at Henry Ford & Son Ltd for continuing the tradition of supplying the official Lord Mayoral car. This is the second year that the Lord Mayor’s car is fully electric, something I believe is vital in highlighting the Council’s commitment to climate action and making the city a more environmentally sustainable city”.

Pádraig Duane, Fleet Business Manager, Henry Ford & Son Ltd. commented: “We are delighted to continue for 2023 the long tradition of providing a Ford car for use by the City’s Lord Mayor.  With its distinctive number plate – always the first car to be registered each year in Cork, the Lord Mayor’s car has become a common sight in and around Cork City and, indeed, in the wider county.  And certainly, the sleek new Mustang Mach-E, all electric premium SUV, is a truly eye-catching and very apt car to continue the tradition, with its zero emissions capability, maximum Euro NCAP safety and green performance ratings.  The Lord Mayor’s Mach-E is the latest extended range AWD model giving maximum flexibility with a range of more than 600km from a single charge.”

Mach-E drivers in Ireland, through Ford’s BlueOval™ Charge Network, have access to around 3,000 charge points on the island of Ireland and over 300,000 public charging stations across Europe.  The charging network includes access to high power chargers such as the fast-charging stations from IONITY. 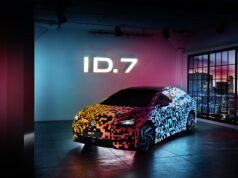 First appearance of the new ID.7 saloon with digital camouflage