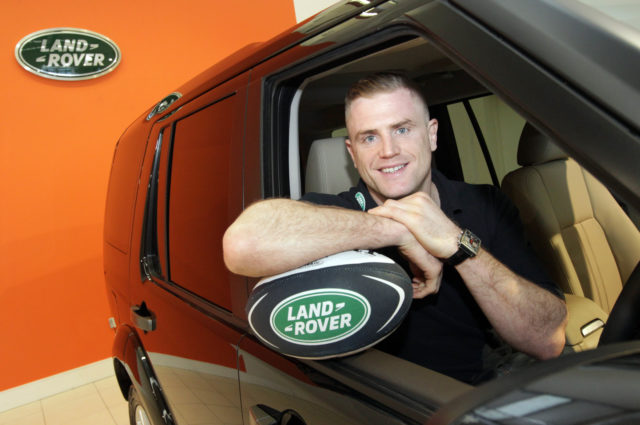 Jamie Heaslip is a former Rugby union who played for Leinster and Ireland. He played as number Eight. Mr Heaslip earned 95 caps for Ireland during his international career from 2006 to 217 making him one of the most capped players in Irish national team history. He also captained the Irish rugby team.

Forced to retire due to injury, the Naas native very graciously took time to speak to this publication about life after Rugby, his ambassador role with Land Rover and what the future holds.

“Land Rover were so heavily involved with the rugby throughout the years that it was a natural progression that Melanie McCourt and I got talking some time ago and I agreed to become a brand ambassador for them. We have a great relationship and I’ve really enjoyed working with them over the last few years. I’ve gone to the Ploughing Championships with them and I’ve done cookery demonstrations and road trips with them and it has all been very enjoyable,” said Jamie Heaslip.

“I’m currently driving the new Land Rover Discovery but you name it and I’ve driven it!”

As to the first car Jamie ever owned?
“I’ve only ever owned one car. I bought a Golf GTI in 2008 and I sold it in 2009 and I’ve been an ambassador for another brand prior to Land Rover. I did drive my parents cars as well. When I left my Leaving Certificate my Dad was based in Belgium (working in Ireland’s special operations force) and my Mum went out to him and I was driving a Nissan Primera and I remember driving that up and down to Dublin for training during the summers because for the remainder of the year I travelled around Dublin on the bus or I cycled because it was handier to travel that way with training and college,” enthused Mr Heaslip.

If Mr Heaslip could own any car in the world, what car would he pick?
“I would love to own a long wheeled base Range Rover Vogue. Range Rover spoilt me on my wedding day and they allowed me to use it (the Vogue) for the weekend of our wedding and it was an amazing vehicle to go around in. I’d love the SVX 90 soft top defender or a 110 soft top defender (with an open cab at the back). The SVX are very hard to get your hands on because they are limited edition but I have to say that the Land Rover Discovery is a great bus,” added Jamie who is a keen car enthusiast.

Having released his autobiography All In late last year, the book has received great reviews.

“I was reluctant to write the book because I didn’t have a sad story to tell but yet I obviously worked bloody hard to get to where I got and nothing came easy.

I’m from a middle class background, my parents were really nice to me and I never wanted for anything but I wasn’t given a whole lot at the same time so life was pretty good and normal for me so that is why I thought I needed to have a hook but when I began talking to people it became clear as to what I had achieved, the success I had, the longevity of my career and so forth,” revealed Mr Heaslip.

“I’ve done interviews with Matt Cooper before and he’s a nice guy as well as knowing a lot of stuff about rugby so it made sense to write the book with Matt and it was a great experience because I very rarely look back on a whole lot and it was nice to look back and go down memory lane and close the page on my career. Matt worked hard to gather a lot of information for me as well,” imparted Jamie.

Having had a phenomenal career, it all came to an abrupt end as he was warming up in the Aviva Stadium on 18th March 2017 for the final match in the Six Nations tournament where Ireland where due to meet Ireland. 45 minutes before the match was due to commence, Heaslip was doing the usual drills and it was when he did the piston drill (with guys holding tackle bags) a drill that is an important one as well as it being done at speed and with force, something he has done hundreds of times previously that when he hit the tackle bag with force he felt something go in his back and immediately his left leg went dead. The Doctor and physiotherapist performed a quick fitness test before he was told that he couldn’t play the match that day. It was the day his career ended. A day Jamie didn’t expect to come as soon, prior to the end of the Six Nations tournament he had also just signed a new contract with the IRFU which would have brought him up until after the 2019 Rugby World Cup.

“Rugby is a precarious sport, it is a contact sport and it is something that you buy in to. You try and put parameters around it, you try and get insurance and you hope that they work out but at the end of the day it is a contact sport and these things happen. I wasn’t sad that my career had come to an end if I’m being honest. I had a good run, I was a part of amazing teams and I met some amazing people and I’ve made some incredible friends. Rugby changed my life for the better and it provided me with a set up for my family that I wouldn’t have had without it and I will be eternally grateful for that,” said Jamie.

“Life after Rugby is very busy! I have a day job, I work as the Head of Brand Marketing for Flender- Fast Flexible Finance (he previously worked as an Irish Large Customer Services Senior Account Manager for Google in Ireland). I am enjoying doing some rugby commentary as well.  I’ve an amazing wife and a wonderful daughter, Harper so it is lovely to be able to kick back and relax with them and not have to worry about training or preparing for matches. Life is a little bit more relaxed in that regard.

As to the future?
“I’d love to bring out a podcast but other than that I don’t know what is coming down the tracks! I’ve gone from being the expert in my chosen career for 20 years and now I’ve had to reinvent myself which is challenging and difficult but it is an exciting time at the same time,” concluded Jamie Heaslip.