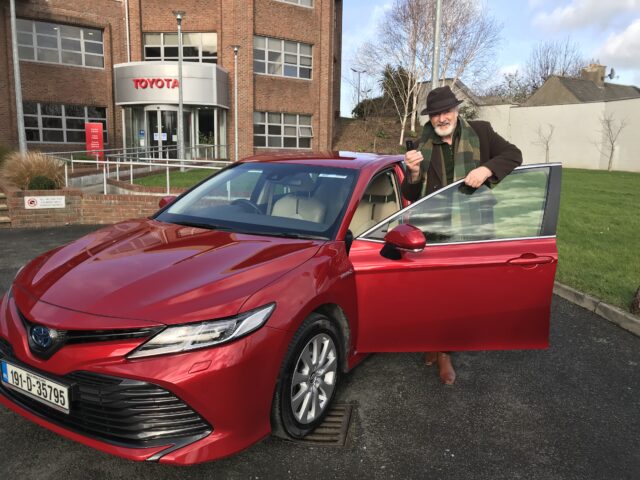 Patrick Connolly Bergin is an Irish Actor who is perhaps best known for his leading role opposite Julia Roberts in Sleeping with the Enemy and for playing the villianious Aidan Maguire in the BBC soap Eastenders.

Mr Bergin was born in Dublin and raised in Drimnagh. His father was a Labour Senator from Carlow.

Patrick left Dublin for London in 1969 and formed his own Theatre Group in West Hamstead in London. Bergin worked on building sites and at The National Central Library. He studied at night and completed a degree in Education.

He worked as an English Teacher for several years helping to set up a school for children that wouldn’t go to school in the Kilburn/ West Hamstead area.

Earlier this year, Patrick was announced as Toyota Ireland’s newest brand ambassador. Patrick is currently driving the Toyota Hybrid Camry. When this publication reached out to interview Patrick, very graciously Mr Bergin committed to the interview without hesitation and we are truly grateful to Patrick for his time and allowing us feature him in our magazine.

“My ambassador role with Toyota came about through Joe Kinsella. The nice thing about my Toyota Camry is that I picked it up on my Birthday and my partner Helen and I headed off to the lovely Wineport Lodge in Athlone and we stopped off in Clonmacnoise on the way back and it’s a lovely car to drive,” said Patrick Bergin.

“My very first car was a 1971 Jaguar XJS and I’ve still got it in the garage but it is beyond use now. The coolest car I’ve ever owned was the Jaguar and I bought that when I was filming ‘Treasure Island,’ on the Isle of Man and the car only had 5,000 miles on it,” added Mr Bergin.

“I’m very impressed with this car and the other interesting thing about the hybrid is has just enough technology to make it very efficient to run and it is also very economical, smooth to drive and it is very quiet whilst in motion.

“It is a brilliant car and of course, as an Actor I love being in front of a Camry,” he enthused.

In 1980, Patrick decided to pursue acting full-time and he found work in repertory theatre. Throughout the 1990’s, he worked in diverse films such as a triology of Yeats plays; Morphine & Dolly Mixtures for which he won a Welsh Best Actor Award and Durango based on John B Keane’s novel; hosting TnaG’s Silín Draióchta and narrating Patrick Cassidy’s famine concert.

After Sleeping with the Enemy, his reputation grew and he was offered the role of Robin Hood with Uma Thurman.

Mr Bergin may be best known internationally for playing the menacing husband of Julia Roberts’ character in the thriller Sleeping with the Enemy and is also known for his role as Irish terrorist Kevin O’Donnell in the film adaptation of Patriot Games. Bergin also appeared as Robin Hood in a 1991 television film. In 2013, he played notorious Glasgow gangster Arthur ‘The Godfather,’ Thompson in The Wee Man. Patrick joined the BBC soap Eastenders towards the end of 2017 and departing in March 2018.

“Subject to Covid-19 I’m due to shoot a short film in September/ October and there is a bigger film called ‘The Cold Sun,’ which will hopefully be shot in Maritius in early 2021,” revealed Patrick.

Presently Mr Bergin is involved in a rather unique project in Powerscourt Estate. Powerscourt Estate is home to the third best gardens in the world and they have launched a novel initiative to encourage people to connect with and be inspired by nature. To create inspirational stories in the forms of poems and lyrics as part of the ‘Poetry in Bloom,’ initiative.

This poetry initiative is an invitation to everyone from seven year olds up to create a poem or write lyrics, inspired by nature they have observed at Powerscourt Gardens and Waterfall throughout the months of August and September. All submissions are online and will automatically be entered into an open prize draw to win a variety of amazing prizes.

‘Poetry in Bloom,’ was developed by Powerscourt in partnership with the creative writing organisation Fighting Words and is in homage to the late Viscountess of Powerscourt Sheila Wingfield who was a gifted Poet with many of her poems inspired by nature and her surrounds at Powerscourt Estate.

The initiative is supported by Mr Bergin as he is a lover of poetry and a great supporter of the arts in the young in London, Dublin and LA. Patrick will be reading through the submissions and helping to select a number of poems to be used as a basis of a short poetry film to close the initiative.

Patrick had the priviledge of singing Leonard Cohen’s ‘Anthem,’ for the Pope on his last visit to Ireland. He also had a number one hit for Christmas with a Christmas song entitled ‘Switzers Song,’ and had several appearances in The National Concert Hall and performed at various venues around the country and abroad.

Prior to Covid, Patrick has been busy with a number of movies and television projects including a television drama ‘The South Westerlies,’ currently on RTÉ One. Just out on Netflix ‘The Last Days of American Crime,’ with Edgar Ramirez and Michael Pitt with several more in the can.

As to projects Patrick is currently working on?

“Next year I have been asked to do a guided tour around Ireland and hopefully I will be using my Toyota for that. Essentially I will be taking tourists (subject to Covid 19) from Dublin to Waterville in County Cork around all of the poetic sites in Ireland. This will be taking place in April or May of next year and I think it will be quite unique. I’m honoured to be an Ambassador for this wonderful Toyota Camry, it’s a wonderful car to drive,” concluded Patrick Bergin.