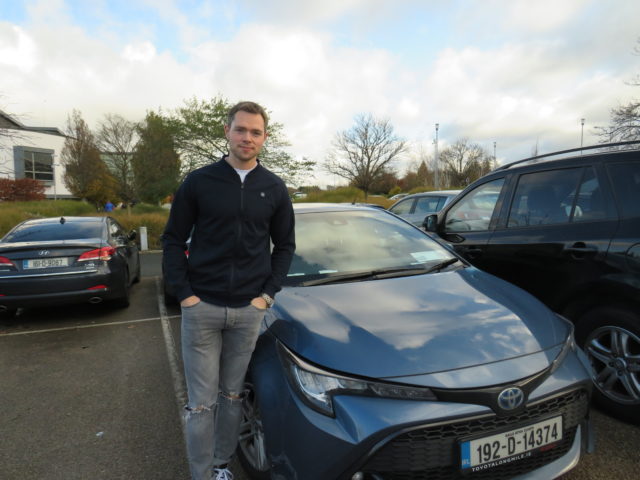 Dean Rock has been a member of the Dublin senior team since 2013 and is one of the names that will roll off your tongue as you discuss the mighty Dublin team that made history last September by winning five All Ireland titles in a row under the watchful eye of Jim Gavin.

Fast forward a few months and a new footballing season has commenced and a new manager has been appointed to the Dublin team in the shape of Dessie Farrell.

Mr Rock has represented Dublin at all grades and he is a noted free taker. GAA pundit and former Meath footballer Colm O’Rourke has described Rock as “statistically the best free taker that has been to Croke Park.”

Here, Dean talks to us about his career, his ambassador role with Toyota Longmile and what the future holds.

“I became an ambassador for Toyota Longmile in 2016 and I’ve built up a great relationship with Paddy Ryan and Alex Burns there over the last few years. I’ve been driving different cars for Toyota

and I’m currently driving the Toyota Carrolla hybrid. It is great to be a part of the Toyota Longmile crew,” said Dean Rock.

“The hybrid is a very smooth car to drive and you would hardly hear a sound of it so that would definitely be a stand out feature for me. My reversing wouldn’t be the best so having the camera (in the car) helps me!

“The first car I ever drove was a Toyota Yaris and my Grand Uncle bought it for me as he couldn’t drive and he used to cycle his bicycle everywhere so he bought me a car and I was able to drive him to and fro to the shops and of course I was delighted about it. It didn’t bother me what car it was, I was just delighted to be driving.

“I was never too in to cars although I was in New York a few months ago with Ciaran Kilkenny and I was driving around in a Rolls Royce so that was pretty cool and it was an incredible experience. If I could have one car in all the world it would be a Rolls Royce, sure we can all dream about owning a car like that,” enthused Mr Rock.

Moving on to the Dubs, how does it feel having five All Ireland medals under his belt?
“It is a surreal experience and the great thing about the winter months is that you have time to reflect on the year gone by and winning five in a row was a huge, iconic moment in Irish sport. It is pretty cool to have achieved that, they were an incredible two games against Kerry (the All Ireland and the All Ireland replay), it was a great championship and we had a nice end to it,” imparted a smiling Dean.

“Of course there is a natural enthusiasm and buzz from our supporters for the game and we’re hearing about ‘in the mix for six,’ but that is natural progression! The supporters are having a great time at the moment but it wasn’t always that good for Dublin and you never know when this winning streak is going to end or stop. We’ve got a special group of players within the team.

“Growing up I was always interested in the GAA and I was kicking a ball from the age of three or four and then through my teenage years I was playing a lot more rugby than GAA but I was always going to end up playing GAA because I would never have been a stand out player (as a rugby player!). Thankfully my GAA career has gone pretty well to date so I’m looking forward to seeing what the 2020 championship has to bring. Playing for a Dublin is a dream come true. Obviously when you are a little boy you dream of playing for Dublin when you are playing football in your garden. When I was growing up, Dublin teams never won and I never had the Sam Maguire trophy in my school as we were going through a barren spell but I still have aspirations and dreams of playing for Dublin. I’m sure there are a lot of the lads (on the team) that are encouraging young kids to take up playing the sport and we have a responsibility to play the game properly and act professionally,” revealed Mr Rock.

In terms of his career to date, has Dean got any stand out moments?
“I first got on the Dublin panel when I was 18 and then I was on the periphery for two years and then I ended up getting a really bad injury which lead to me being away from the team until 2013 when Jim Gavin came in as manager. Jim brought me on in a league final match against Tyrone with 20 minutes to go and we were two points down and I remember scoring two points and that would probably be one of my best moments as it was the first time I put myself on that stage and it was nice to come in that match and make an impact and since then I’ve started nearly every match.

“I would have worked alongside Jim so 2009 and I would know him very well and I would know what he is about. Jim is meticulous in his detail and he leaves no stone unturned. He’s was a very much loved man in our set up,” added Dean.

When it comes to Dean’s day job, he is a Fundraising and Communications Manager in Stewarts Care in Palmerstown.
“I was studying a sports science undergraduate programme in DCU in 2013 and one of the modules was to go out to Stewarts Care and coach Special Olympic athletes and I loved doing that so when it came around to doing a six month work placement and I got a job there and when I was finished doing my undergraduate programme, the CEO of Stewarts approached me to see if I would be interested in coming on board and replacing someone who was on maternity leave and then I moved in to the area I’m in now.

“I’m passionate about Stewarts Care and I’m willing to use my profile to raise awareness about the organisation and to help them raise funds that they don’t receive from the HSE (they are Government funded by the HSE) but there are so many projects that need fundraising support and that is where my role comes in to it,” he revealed.

“Stewarts Care is a charity that not too many people know about, the organisation is the fifth biggest disability service in the country and there are 1,000 staff and 1,000 people with intellectual disabilities that receive care and support from Stewarts.”

As to what the future holds?
“I’ve another few years left to go before I retire! James McCarthy and I are both turning 30 in February (we’re best friends) so I know we will be playing club and county football for another while yet. When we have a club break in April, I will probably have a little celebration but turning 30 is something to look forward to more so than something to be dreading.

“Personally, I’m just taking one year at a time and seeing how it goes. From a work perspective, I just want to see Stewarts continue to grow as an organisation and to leave my bit of a legacy there for as long as I can.

“If 2020 is as successful as 2019 then I will be happy so fingers crossed for that,” concluded Dean Rock.