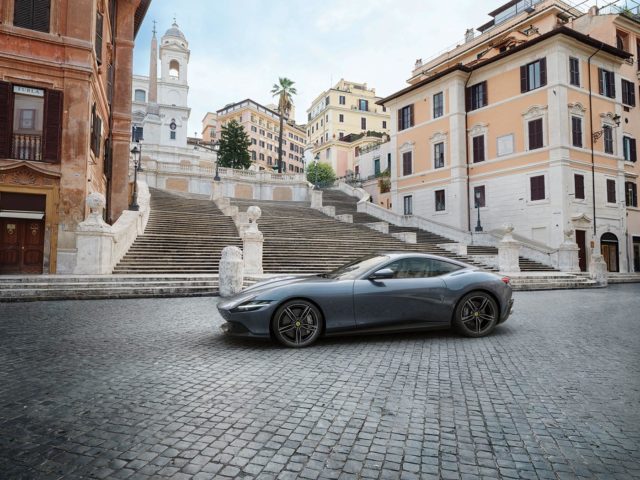 The Ferrari Roma exemplifies the concept of the Nuova Dolce Vita

The latest coupé from Maranello features harmonious proportions and elegantly balanced volumes which are very much in line with Ferrari’s front-engined grand touring tradition. Timeless and sublimely refined, from a technical point of view the Ferrari Roma introduces a series of unparalleled features that put it at the top of its segment in terms of performance and driving enjoyment.

These include most notably a new powertrain with 8-speed gearbox, the introduction of the five-position manettino for the first time on a Ferrari grand tourer, and a best-in-class power/weight ratio. All of which make the Ferrari Roma the most powerful and fun to drive mid-front-engined V8 2+ in Ferrari history. Not forgetting either the fact that the concept is underpinned by everyday driveability and superb on-board comfort.

The Ferrari Roma’s 620 cv engine belongs to the V8 turbo family voted International Engine of the Year for four years in a row. The main innovations on this version of the Ferrari V8 are new cam profiles, a speed sensor which measures the turbine revolutions and allows the maximum revs per minute to be increased by 5,000 rpm, and the introduction of the Gasoline Particulate Filter to comply with the strictest Euro 6D anti-pollution standards. Ferrari engineers worked hard to optimize the GPF, a closed matrix filter which traps particulate matter produced during thermal engine combustion, thus guaranteeing that it would not compromise driving pleasure.

The car’s new 8-speed dual-clutch gearbox is more compact and 6 kg lighter than its 7-speed predecessor. As well as reducing fuel consumption and emissions, shifts are faster and smoother thanks to the use of low-viscosity oil and a dry sump configuration to minimise fluid-dynamic efficiency losses, which makes the car even more responsive on the open road, but also especially comfortable in town and during stop & start driving situations.

The gearbox is based on a dual-clutch oil bath architecture and is derived from the new 8-speed gearbox introduced on the SF90 Stradale. The main modifications made with respect to the latter are longer gear ratios and the introduction of a reverse gear (which is not used in the SF90 Stradale gearbox as the electric motor is used for this). The new clutch module is 20% smaller but delivers 35% more torque than that of the previous 7-speed. The transmission software strategy has been evolved thanks to a more powerful ECU and better integration with the engine management software. This has made the shifts quicker, smoother and more consistent.

Like all other turbocharged Ferraris in the range, the Ferrari Roma delivers almost instantaneous throttle response (in line with the Company’s zero turbo lag concept) thanks to its flat-plane crankshaft, more compact in size with lower rotating masses to improve fluid-dynamics; compact turbines which have a lower moment of inertia; the twin-scroll technology that increases the pressure of the exhaust pulses for maximum power; and the single-piece cast exhaust manifold with equal length pipes to optimise pressure waves in the turbine and reduce losses.

The Ferrari Roma boasts Variable Boost Management, a control software developed by Ferrari that adjusts torque delivery to suit the gear selected, delivering increasingly powerful pick-up as revs rise, whilst optimising fuel consumption. As the car goes up through the gears the amount of torque delivered by the engine increases all the way up to 760 Nm in 7th and 8th gear. This has allowed Ferrari to use longer gear ratios in the higher gears, which helps keep fuel consumption and emissions down, while adopting a steeper torque curve through the rev range in the lower gears for a feeling of smooth, consistent pick-up.

By tradition, every single Ferrari engine has its own particular soundtrack that makes it unique. The Ferrari Roma is no exception to that rule. To achieve this goal the geometry of the entire exhaust has been redesigned thanks to the elimination of the two rear silencers, which significantly reduces backpressure in the tailpipes; a new geometry for the by-pass valves, machined to an oval shape which reduces exhaust backpressure and improves sound quality; and the proportional continuous and progressive by-pass valve control, depending on the driving situation.

The integration of highly technical features, aimed at obtaining sports car-type downforce, with the car’s design concept was made possible by the fact that the Ferrari Aerodynamics department and Styling Centre work hand-in-glove on a daily basis. The Ferrari Roma generates 95 kg more downforce at 250 km/h than the Ferrari’s other 2+ model, the Portofino, thanks to vortex generators on the front underbody and active aerodynamics at the rear. The former were given the task of very efficiently generating downforce on the front axle with a negligible increase in drag, while the electrically activated mobile spoiler produces downforce at the rear to optimally balance the car.

The mechanism is activated by an electric motor in relation to speed and longitudinal and lateral acceleration. In low speed situations, when downforce has only a modest impact on the car’s performance, the spoiler automatically goes into LD position. This configuration is maintained until the car hits a speed of 100 km/h.

Over 300 km/h, the spoiler is always in MD mode because in such conditions it is preferable to have a more balanced car, in part because of the minimal impact on drag. In speed ranges in which downforce plays a pivotal role in performance, the spoiler is in MD position and its movement depends on the car’s longitudinal and lateral acceleration. The position of the mobile spoiler is not selected manually. Its activation threshold value is variable and linked to the manettino position. This choice was made because of the desire to harmonise the integration of downforce generation with the vehicle dynamics controls.

The Ferrari Roma’s design took inspiration from the concept of sporty elegance celebrated in the most legendary grand touring Ferraris of the 1960s, front-engined cars with simple yet elegant forms and a 2+ fastback coupé design. The Ferrari Roma shares many of these characteristics and embodies an extremely modern design language; it’s pure, refined styling and perfect proportions cleverly conceal the car’s power and sportiness.

The sober, spare front of the car creates an overhanging shark nose effect. The wide front bonnet and sinuous wings flow into one another, in line with Ferrari’s traditional styling cues. The designers sought to preserve the minimalist elegance of the car’s forms by removing any vents or superfluous decorations; for instance, engine cooling is guaranteed by surfaces locally perforated only where strictly necessary, creating a new interpretation of the grille concept. In addition, the car was designed without the Scuderia Ferrari side shields, reflecting the approach taken with the road cars of the 1950s. The two linear full LED headlights, which lend the front of the car a distinctive character, are traversed by a horizontal light strip that brings a sense of tension to the car, in a nod to the iconic Ferrari Monza SPs.

The leitmotif of the entire Ferrari Roma design is its purity, as evidenced by the active rear spoiler integrated into the rear screen. The tail of the car is very modern; technological developments made it possible to reduce the dimensions of the taillight assemblies, resulting in a minimalist form. The twin taillights look like gems set into the volume while linear light strips create a dialogue with the nolder, generating a sort of continuous virtual line. A compact diffuser that incorporates the fences and the exhausts completes the rear of the car.

A new architectural concept for volumes and forms was developed for the Ferrari Roma’s cabin. The idea was to create two separate spaces or cells, one each for driver and passenger, in an evolution of the Dual Cockpit concept introduced on other cars in the range. The strikingly innovative look of this dual cockpit was achieved by extending the philosophy applied to the dash to the entire cabin. A cleverly balanced combination of elegance and sportiness brings a sense of exceptional refinement and unique character to the interior, thanks to a spare, modern design language that underscores the formal purity of both lines and volumes. Thus, the cabin is defined by elements that develop organically and as one around the whole concept of space and its perception.

Unlike the Prancing Horse’s sports cars, which are typically more driver-oriented, the Ferrari Roma’s cabin has an almost symmetrical structure which produces a more organic distribution of both spaces and functional elements. In fact, the passenger will feel very involved in the driving experience, almost like a co-pilot. In line with this integrated architecture approach, forms have been crafted to create a sculptural volume in which there is a sense of textural continuity between all the various cabin elements. Created by paring back the volumes and underscored by piping along their edges, the two cockpits are cocooned in a wraparound volume and extend from the dashboard all the way back to the rear seats, organically incorporating the dash, doors, rear bench and tunnel.

The Ferrari Roma’s F1 controls have been set into the central console in a modern metal plate which references an equally iconic feature from the past: the classic gear lever gate. This element is angled to make it easier for the driver to reach and see.

The second a driver or passenger sits in the Ferrari Roma they are instantly aware of a feeling of modern yet iconic luxury, combined with the use of the most exclusive materials, not least full-grain Frau® leather, Alcantara®, chromed aluminium and carbon-fibre. The result is a distinctive car with a design that means the Ferrari Roma effortlessly meets the tastes of the most sophisticated clients. All of this makes the Ferrari Roma perfect for those looking for a car with an iconic and timeless design, capable of delivering unique driving experiences. The Prancing Horse’s new V8 2+ coupé embodies, beyond any doubt, the concept of “La Nuova Dolce Vita”.

The look and feel of the cabin was driven by the complete redesign of the HMI, which marks a major leap forward starting from the new Ferrari range steering wheel designed using the “Eyes on the road, hands on the wheel” philosophy. The digital instrument cluster is protected by an elegant binnacle, which extends out naturally from the dash. The instrumentation is now entirely digital with all the screens going completely black when the car is not running, lending the cabin a very minimalist look. But once the Engine Start button on the steering wheel is pushed, a “ceremony” of sorts begins that sees all the digital components gradually springing to life until the whole cockpit is aglow.

The instrument cluster comprises a single 16” HD screen that is curved to make it easier to read. In the default screen, the navigation and audio screens surround the large circular rev counter. The screen’s dimensions mean that there is huge flexibility in terms of personalising the displays, which are very easy to navigate using the steering wheel controls. For example, it is possible to select a full screen version of the navigation map for ease of use.

The new steering wheel introduces a series of multi-touch controls that allow the driver to control any aspect of the car without ever taking their hands off the wheel. Traditional controls include the 5-position manettino, headlights, windscreen wipers and indicators. The new haptic controls include a very practical touchpad on the right-hand spoke of the steering wheel which allows the driver to navigate the central cluster screens, while voice and Adaptive Cruise Control are on the left.

The extremely intuitive and easy-to-use new 8.4” HD central display, set between the two cockpits, incorporates the other infotainment, sat-nav and climate control functions. The passenger’s experience reaches a new level with the optional 8.8” colour Full HD touchscreen which not only displays the car’s performance figures and status, but can also be used to interact with its on-board system selecting music, viewing satnav information and managing air conditioning functions. So essentially, the passenger becomes a co-driver.